The institutional transformation of airports .. Supports the future of the air transport industry in the Kingdom

The civil aviation sector in the Kingdom of Saudi Arabia has witnessed great development progress in its various fields, with the help of God and the generous support for its projects from the kings of the Saudi State since the era of the founding king (may God rest his soul). The kings of this country and throughout its history built an integrated system of airports throughout the country, reaching (29) airports, receiving millions of travelers from inside and outside the Kingdom.

The sector has received great attention and generous efforts for its projects from the government of the Custodian of the Two Holy Mosques. The sector being a major driver of the growth of the national economy, its strong impact on achieving sustainable development and a reliable major contributor in achieving the Kingdom’s Vision 2030, developing the air transport sector and enhancing the Kingdom’s position globally as an influential country in the international civil aviation industry.

During the reign of the Custodian of the Two Holy Mosques, King Salman bin Abdulaziz Al Saud, (may God protect him), the sector witnessed qualitative leaps and rapid developments in various fields, achieving record numbers in economic and social development, and a leading and pioneering global presence at various levels. This includes the announcement of His Royal Highness, Crown Prince Mohammed bin Salman bin Abdulaziz for the National Strategy for Transport and Logistics Services, which was preceded by the Cabinet’s approval of the civil aviation sector strategy. Further making the Kingdom a logistic center linking the three continents and a global hub for air transport and freight.

In order to activate the role of the private sector and enhance contributions to airport projects and the air transport market in the Kingdom, the General Authority of Civil Aviation (GACA) worked on an institutional transformation project for airports to enhance the governance of the air transport sector on sound economic foundations to support the future of the sector’s industry in the Kingdom, with the best international practices to make a qualitative leap and a major leap in the development of airports. Furthermore, it will open the way to attract more local and international investments, expand partnership with the private sector, enable business growth, support integration in the transport and logistics system, and enhance the quality of services for customers and travelers.

GACA has succeeded in transforming its sectors into companies with the aim of raising operational efficiency. Meanwhile, a few years back, Prince Mohammed bin Abdulaziz International Airport in Madinah was established through partnership with the private sector in the manner of build, transfer and operate (BTO). It is the first airport in the Kingdom to be built and fully operated by the private sector, in partnership with Tibah Airports Operation Company. Furthermore the establishment of the Airports Holding Company, through which several companies were established, such as Riyadh Airports Company, Dammam Airports Company, and Jeddah Airports Company recently. This in addition to the institutional transformation of Al-Ahsa International Airport and Qaisumah airport in Hafr Al-Batin, to operate alongside King Fahd International Airport in Dammam in one grouping under the umbrella of Dammam Airports Company. Soon, work will be done on a company that brings together airports with the aim of working on a commercial basis, while GACA will return to work as a legislative regulator that performs its role with full transparency and independence.

All these major achievements have contributed to the development of the air transport system in the Kingdom, achieving a prominent position at the international level, bringing the air transport industry to the best international levels, and contributing to the consolidation of cooperation between the countries of the world in the field of civil aviation, and the formulation of international decisions in the various fields of the air transport industry. While keeping safety and security in the forefront, the Kingdom was able to build an integrated system of modern airports that took advanced positions in the classification of airports at the global level, and was keen on educating and training the sons and daughters of this country in the civil aviation field and its sciences to be able to lead and chart the future of this industry. An industry, which is the main engine for the growth of the local and international economy. 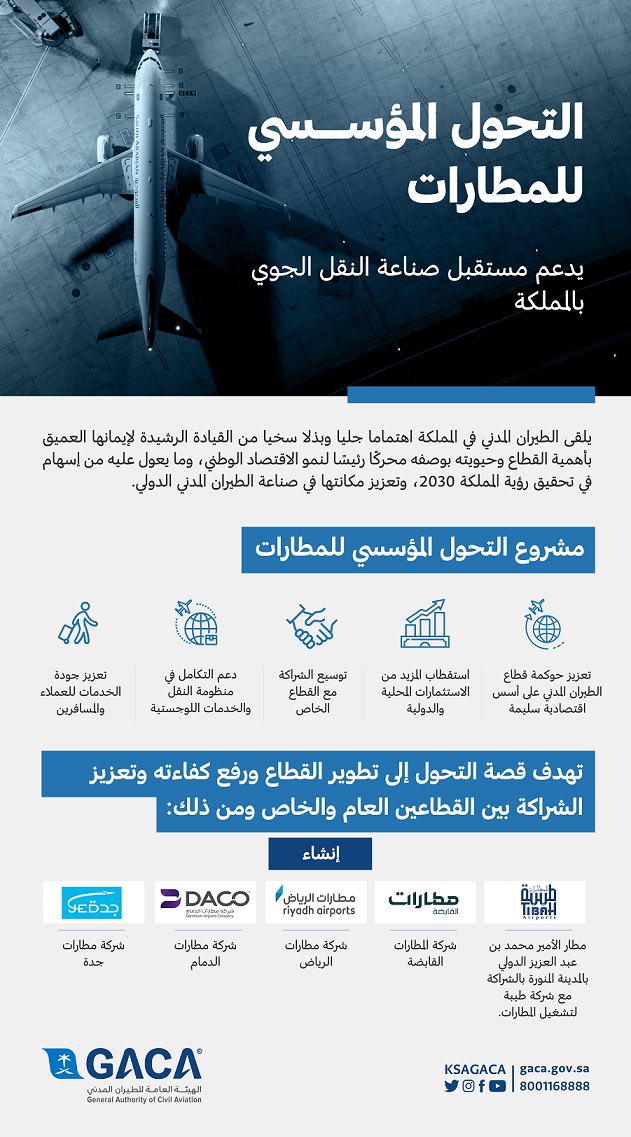