AlUla Airport ... the first window to the city of civilization, love and peace

Today, Tuesday the 5th of November , AlUla governorate hosted the 41st session of the Cooperation Council for the Arab States of the Gulf, And the leaders of the Gulf Cooperation Council states arrived at the first AlUla window, Prince Abdul Majeed bin Abdulaziz airport, in a historical summit whose title was the Summit of Love and Brotherhood, which is symbolized by the ancient name of  AlUla city , as it was known in BCE (before the common era) - according to some historical sources – as the name  (Dadan), which means friendship, love and peace, and the gracious invitation came from the first sponsor of heritage, history and civilization in the Kingdom, the shrine of the Custodian of the Two Holy Mosques King Salman bin Abdulaziz Al Saud - may God protect him - For the leaders of the countries of the Gulf Cooperation Council to hold the Gulf summit in AlUla governorate, to represent an important historical, political and cultural event in the history of a city of the most ancient and ancient Arab cities.

AlUla Governorate has been lucky to receive direct attention from His Royal Highness Prince Muhammad bin Salman bin Abdulaziz, due to the archaeological, historical, tourist, civilizational and cultural treasures that the governorate enjoys, translated by the establishment and launch of the Royal Commission for AlUla - may God support him , to see AlUla in confirmation of the care and interest in this governorate, which is rich in its resources, which makes it a tributary to the national economy and a cultural window for our noble homeland, especially after its effects were registered as the first national site on the UNESCO World Heritage List.

AlUla Governorate, in the northeast of the Kingdom, has been at the crossroads of civilizations, people and cultures for thousands of years, as it is a unique icon in the Arabian Peninsula and is considered an open archaeological museum that cannot be compared to anything else in the world, this extraordinary city in in history has witnessed stories of kingdoms and ancient and great human civilizations, and here is AlUla today, gathering the people of the Gulf Cooperation Council in an exceptional summit aimed at reinforcing joint work and expanding cooperation and integration between member states in all fields, in order to fulfil the aspirations and hopes of the citizens of the GCC countries.

In recent years, AlUla Governorate has witnessed a quantum leap in terms of development and tourism, making The Bride of The Mountains the next global tourist destination within a short period of time, the General Authority for Civil Aviation has seen the future of this tourist governorate. The first building blocks were laid in the development and tourism industry in the governorate through the establishment of Prince Abdul Majeed bin Abdulaziz Airport in AlUla, which contributed to advancing tourism development, and witnessed on October 31, 2011 an important event for AlUla governorate where the first "Embraer" plane landed, coming from King Khalid International Airport in Riyadh, announcing the start of the new airport in AlUla, which used in its construction local materials consistent with the picturesque environment of AlUla and its ancient legacy. Numerous renovations have also taken place at the airport aimed at improving the traveller’s experience in cooperation with the Royal Commission for AlUla Governorate, which were completed in mid-2020 AD, so that the airport accommodates 400,000 passengers annually, with a total area of (24) million square meters, 25 km southeast of AlUla city center, and about 50 km away from the monuments of the stone site.

GACA has harnessed all capabilities and contributed to facilitating all procedures during the 41st session of the Cooperation Council for the Arab States of the Gulf, Where the authority has worked to build an executive lounge inspired by the environment of AlUla equipped with the latest technologies and needs in line with the vision of the Kingdom, and to prepare the main terminal by redesigning it to suit the environment of AlUla and increasing the capacity, in addition to increasing the capabilities of the AlUla airport flight yard to become among the top 10 airports in the Kingdom, In addition to implementing additional aircraft parking areas of 49,000 square meters to accommodate 15 commercial aircraft at one time, And to implement the corridors for aircraft with an area of ​​181 thousand square meters to facilitate the smooth flow of movement inside the square and direct it easily, two connecting lanes were also added to enter and exit the runway to become three lanes, and all aircraft stands were equipped with electronic guidance systems for aircraft ( marshalling) VDG. 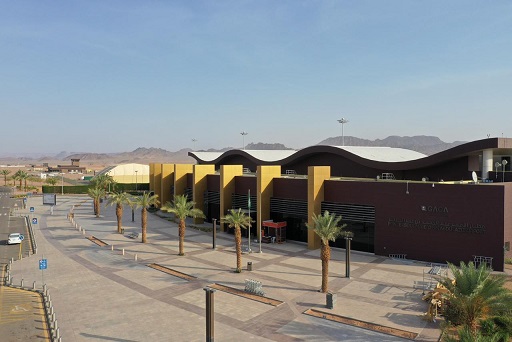