Riyadh January 10, 2019
In the year 2018, the General Authority of Civil Aviation (GACA) achieved unprecedented achievements that contributed to the development of the air transport industry, locally, regionally and internationally.

The achievements comes at a variety of levels, including safety and aviation security, the development of airports and the improvement of the traveler's experience.  This as well as the development of the work methods and the methodology of protecting customers according to the latest international systems and standards.

One of the most notable achievements was the soft opening of the new King Abdulaziz International Airport in Jeddah.  Furthermore the publication of the customer protection manual, under the theme “Your Rights are Protected”.  Also, the adoption of the Unified Model Theme at the Kingdom’s airports.  In addition, the Kingdom also hosted the 4th Safety Summit in the Middle East and the selection of the capital city Riyadh as the headquarters of the Middle East and North Africa (MENA-RSOO). In addition, the Kingdom presided over four out of five technical committees in the Arab Civil Aviation Organization (ACAO).  This is a solid indication of the Kingdom's effective presence on the international stage.

The achievements were reflected in the growth of the civil aviation market in the Kingdom of Saudi Arabia and the increase in air traffic. The number of passengers at the Kingdom's airports in 2018 reached more than 98 million passengers, an increase of 7.4% over the previous year, while the number of flights in 2018 increased by 3.4% Of 773 thousand flights.
This is accompanied by a rise in the level of services evaluated and measured monthly.  In addition to the application of the highest of international quality standards.  GACA was also keen on maximizing security and safety of air traffic in its airspace and throughout the airports around of the Kingdom.  In this context, the soft opening launch of the new King Abdul Aziz International Airport in Jeddah, with a total terminal complex area of ​​810,000 square meters, and can reaches a total a capacity of 30 million passengers annually. The service corridor connects all the loads area at a length that reaches 46 kilometers.  In addition to 220 check-in counters and 80 self-service counters.

On the construction projects and development programs side, GACA has completed the development of Tabuk airport; complete a bus stop area, a parking lot area, a sewage treatment plant, inspection rooms for people with special needs and 6 administrative offices and the separation between domestic and international terminals.  This in addition to the foundation stone laying ceremonies to each of the new Jazan Airport, Al-Jouf, Al-Qurayyat and Qunfudah airports through the Unified Airports Model Project theme.
GACA did not overlook the category of people with disabilities, where it has discussed with the Ministry of Labor and Social Development ways to convert Saudi airports to airports that are friendly to people with disabilities and to develop the efforts of the two sectors in relation to the service of passengers, especially the disabled.

Moreover, in order to achieve the objectives of the Kingdom's vision 2030 in recruiting Saudi national talent, GACA has been keen to attract Saudi cadres in some vital sectors.  This step has been commended and applauded by the ICAO. The ICAO also thanked GACA for the step taken in recruiting young Saudi women in some vital sectors. The ICAO also thanked the General Authority of Civil Aviation in the Kingdom for encouraging women and providing access to air surveillance study, stressing that this initiative comes to implement the ICAO Strategy for Equal Employment.

Among the most important achievements of GACA is to contribute to the success of the pilgrimage season 1439 and to participate in the Mecca Road initiative. It has put together with the participants in the implementation of this initiative integrated operational plan.  The plan aimed at implementing the best services for the pilgrims and facilitating the arrival procedures for pilgrims.  In addition to GACA’s use of all needed facilities to receive the guests of Rahman in coordination with government and private agencies working at airports.  Furthermore, GACA worked to improve the services of guests arriving by air and to use all the possibilities in the Hajj and Umrah services to serve the guests of the Rahman and provide convenience and speed in the King Abdulaziz International Airport in Jeddah and Prince Mohammed Bin Abdul Aziz International Airport in Madinah.  In addition, to the Hajj and Umrah Terminal Complex, in order to facilitate the arrival and departure procedures for the pilgrims.

In order to provide the best services to the pilgrims and to improve the quality of services provided to them according to the latest international standards. This to achieve one of the most important objectives of the vision of the Kingdom of 2030 by receiving 30 million pilgrims and improving and enriching their experience them to be of quality and value.

As part of its keenness on serving passengers, GACA launched the "Your Rights are Protected” initiative, which aims to educate travelers on their rights and the accompanying campaigns and educational activities to educate the passengers on their rights.  These include organizing the civil aviation forum in Riyadh with the participation of a number of governmental and private bodies, where they discussed the most prominent methods and mechanisms that contribute to the optimal cooperation between all concerned parties in order to raise the level of services to passengers according to the targeted standards.

And in line with GACA’s vision to augment its services with modern and advanced services, GACA launched the unified airport model project (Al Jouf, Al Qurayyat, Al Qunfudah), that comes within the framework of the Kingdom’s vision 2030.  These unified airports comes in three dimensions (small, medium and large). Check-in counters at the departure stages are 17, immigration control with 4 counters for passports in the departure area, 6 for immigration control in the arrival area, in addition to 4 jet ways.

As part of GACA’s efforts to take care of its facilities and private aviation services in many of the Kingdom’s airports, a new private aviation terminal was introduced at King Khalid International Airport in Riyadh.  This part of the privatization program to develop the capacity of the airport, the terminal was completed within 60 days, at an average of 36,000 working hours, and is located on an area of ​​3000 meters.

The Kingdom, represented by the General Authority of Civil Aviation, has four technical committees out of five committees in the Arab Civil Aviation Organization. The Kingdom enjoys international trust. The Kingdom is one of the largest supporters of international organizations, is a pioneer in supporting the civil aviation industry, and is seeking to develop various areas of the industry.

The achievement of the Kingdom’s aviation is not limited to local endeavor; its achievement went far beyond.  A delegation from the GACA, headed by His Excellency the President of the General Authority of Civil Aviation, Mr. Abdul Hakim Al Tamimi, visited the United States of America.  The delegation met with a group of officials in the field of aviation and air transport in a number of US states.  Thereafter GACA signed a memorandum of understanding with the Federal Aviation Administration of the United States of America to enhance cooperation and exchange of experiences in the fields of civil aviation and another memorandum aimed at training, training and capacity building in various aviation sectors and in the field of peace. Security and environmental protection in air transport, in addition to improving civil aviation operations, access to the latest technologies and best practices in various sectors of civil aviation.  The delegation met with senior officials of more than 50 American companies specializing in civil aviation, as well as other meetings with companies specializing in airport constructions and related consultancy services in the fields of civil aviation and air transport industry in the Kingdom.

Furthermore, in the United Kingdom, and in cooperation with the British-Saudi Business Council, the Commission organized a roundtable meeting with major British companies in the field of civil aviation to discuss activities of the aviation sector in the Kingdom.  The delegation also reviewed the possible investment opportunities in the civil aviation sector that are in line with the Kingdom’s vision 2030.

In Kenya, GACA concluded a series of strategic agreements at the ICANN conference with a number of countries on different continents of the world on the sidelines of the Eleventh Air Services Negotiations Conference held in Nairobi, Kenya.

In the Kingdom of Bahrain, GACA signed an Air Services Agreement with the Kingdom of Bahrain during the 2018 International Air Show and the signing of a strategic partnership agreement with Taqnia Space Company to enhance the Kingdom's position at the regional and international levels.
At the event level, GACA, in cooperation with ICAO, organized the 4th Middle East Safety Summit Forum, which discussed aviation safety and challenges.  The first meeting of the Executive Committee of the Regional Safety Oversight Organization for the Middle East and North Africa was chaired by GACA, with the participation of heads of civil aviation bodies of Member States, the ICAO Regional Office and the Arab Civil Aviation Organization.  The headquarters of the organization was also moved to the capital city of Riyadh.

GACA also participated in the 13th Air Navigation Conference organized by the International Civil Aviation Organization (ICAO), where the Conference discussed updating the Global Navigation and Safety Plan to take account of emerging challenges in the air navigation system.

As a result of these achievements and initiatives, GACA was awarded the (ISO 9001: 2015) quality management certification, which includes international standards for quality management, for the excellence of the work environment in all sectors and departments at GACA. 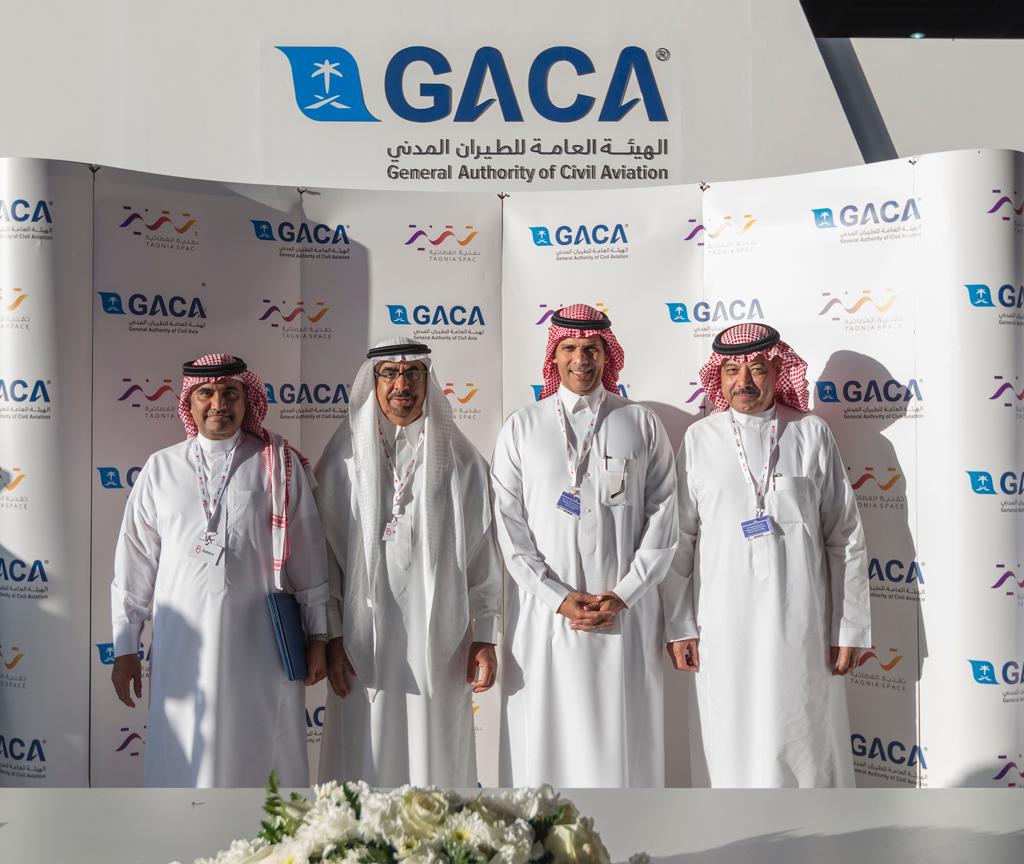 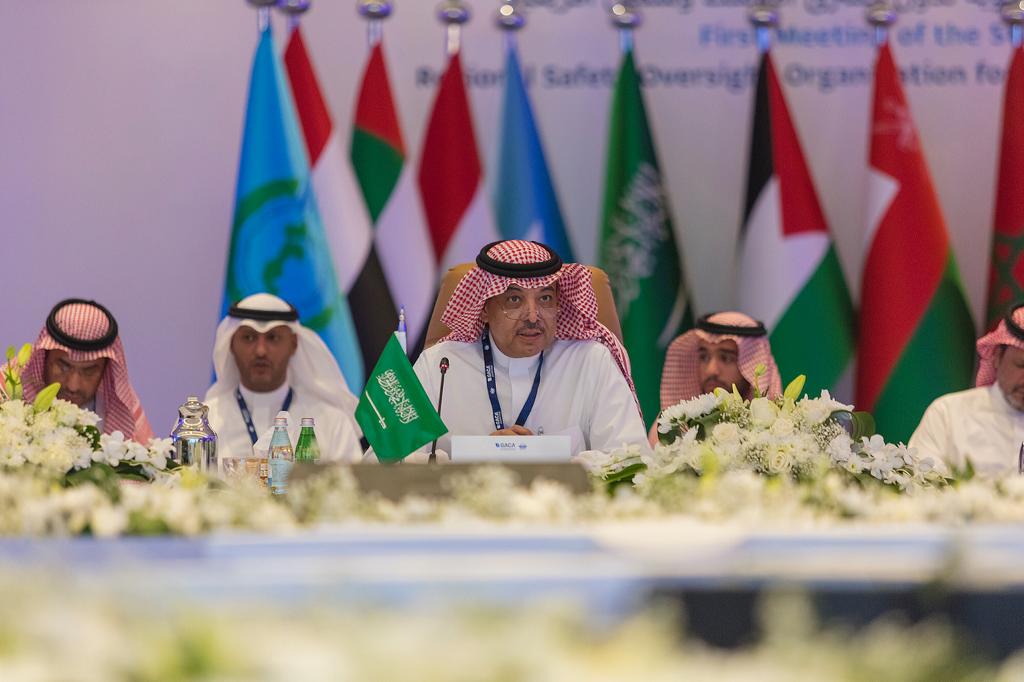