The General Authority of Civil Aviation (GACA) participated today in the celebration of the World Environment Day, which falls on June 5 of each year, sensing the importance of this global event and contributing to the preservation of the environment and its natural resources in general, and the airport environment in particular, and the reduction of carbon emissions.

GACA has adopted several initiatives and programs that guarantee environmentally friendly operational processes, in line with the Kingdom's commitment to reducing carbon emissions, which reflects the excellence of GACA’s strategy in implementing many projects and initiatives aimed at implementing the highest standards of sustainability within a legislative and regulatory framework that helps preserve the environment and its natural resources.  This in cooperation with the competent authorities in the Kingdom and international organizations around the world such as the International Civil Aviation Organization (ICAO) and Airports Council International (ACI).

Currently, GACA is developing the (State Action Plan) to reduce greenhouse gas emissions, including carbon dioxide, emitted from civil aviation activities by improving flight paths, improving operating procedures at airports and ground movement, as well as programs to improve aircraft efficiency and engines with operating companies, inventory and pinpointing the sources and quantities of emissions, and the adoption of international best practices to reduce those emissions. This plan also reflects the Kingdom's commitment and interest in protecting the environment and the risks of climate change, by constantly working to update plans to enhance the principle of transparency and commitment.

Among the initiatives that GACA has started to work on to preserve the environment: the initiative of the Custodian of the Two Holy Mosques, King Salman bin Abdulaziz for Renewable Energy, where work has begun on the necessary studies and obtaining approvals from the concerned authorities to transform Arar Airport and Al-Qurayyat Airport into airports that are completely based on renewable energy. This in addition to Prince Mohammed bin Abdulaziz International Airport in Madinah, partially dependent on renewable energy.

On the other hand, GACA has embarked on developing a comprehensive plan for environmental sustainability for airports, including standards for solid waste management and hazardous materials, plans to rationalize energy consumption and reduce carbon footprint, standards for water management and local air quality, as well as standards for noise reduction from civil aviation activities, in order to set the Kingdom's airports in an advanced position in the field of environmental protection.

Meanwhile, the local air quality in the Kingdom’s airports has received great attention from GACA, as work has been done to install 13 air quality measurement stations at King Khalid International Airport in Riyadh, and they will be linked with the National Center for Monitoring Environmental Compliance to provide direct data around the clock for levels of air pollutants at the airport and work to reduce its risks. 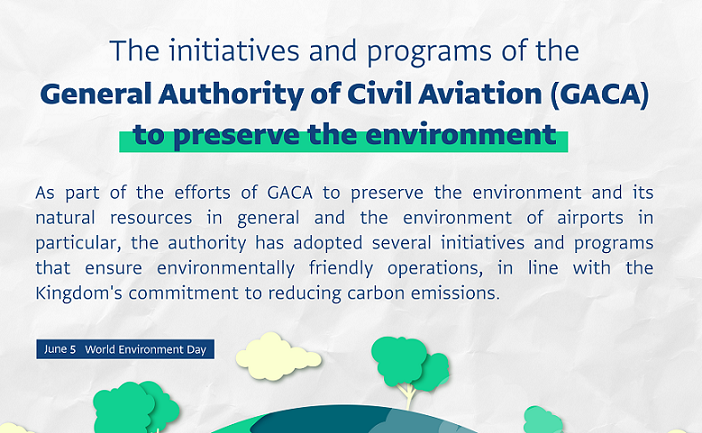