Flights arrival from Washington, Houston, New York and Beirut within the designated flights intended for the repatriation of citizens to Riyadh and Jeddah airports

In compliance with the directions of the Custodian of the Two Holy Mosques King Salman bin Abdulaziz Al Saud and His Royal Highness Prince Mohammed bin Salman bin Abdulaziz Al Saud, Crown Prince, Deputy Prime Minister and Minister of Defense (may God protect them both) and in the interest of leadership for the safety and health of citizens abroad in light of the outbreak of the Coronavirus pandemic . Furthermore, to follow up on their affairs, their families wellbeing and that of their companions, since the start of the virus outbreak in countries around the world, and making sure that everything that would guarantee their safety until their return safely to the homeland. Two flights arrived at King Khalid International Airport in Riyadh today, arriving from Washington and Houston. Meanwhile, two flights arrived at King Abdulaziz International Airport in Jeddah from New York, in the United States, and from the Lebanese capital of Beirut. All flights are part of the international trips intended to repatriate citizens who wish to return to the Kingdom. The citizens were received by representatives of the Ministry of Foreign Affairs, the Ministry of Tourism, the Ministry of Health, and the General Authority of Civil Aviation (GACA).

Immediately upon the citizens arrival to King Khalid International Airport in Riyadh and King Abdulaziz International Airport in Jeddah on board Saudi Arabian Airlines, all health and preventive measures were taken to combat the novel Coronavirus (COVID-19). Meanwhile, government agencies represented in (the Ministry of Foreign Affairs, Ministry of Tourism, Ministry of Health, and the General Authority of Civil Aviation) have taken many steps and preventive measures, which include the (12) stages that are applied from the arrival of citizens at the airport of the country of departure until the arrival and departure from the kingdom's airports. During the first stage, a medical examination is carried out on the passengers at the airport at the country of departure. Then, and before they board the aircraft. in which care is taken to ensure safe distance between passengers. Meanwhile, upon arrival of the flight to the Kingdom's airports, GACA took the measures by which the passengers disembark from the aircraft in a controlled manner to ensure the physical safe distance between the passengers inside the terminal. This in addition to providing an area for sterilization of hands at the passengers bridge gates.

It is worth noting that the Ministry of Health has designated a checkpoint through which all incoming passengers pass the mandatory thermal camera devices to ensure their safety. Upon suspecting a case amongst passengers, the case is then isolated from the rest of the passengers and a safe path is then activated to transfer the case. Passengers are required to sterilize their hands before starting the passport control procedures and having their passports stamped. Meanwhile, in the customs inspection area, a distance of at least 2 meters is maintained between the customs officers and passengers, while all incoming passengers will be assisted in the baggage claim area. 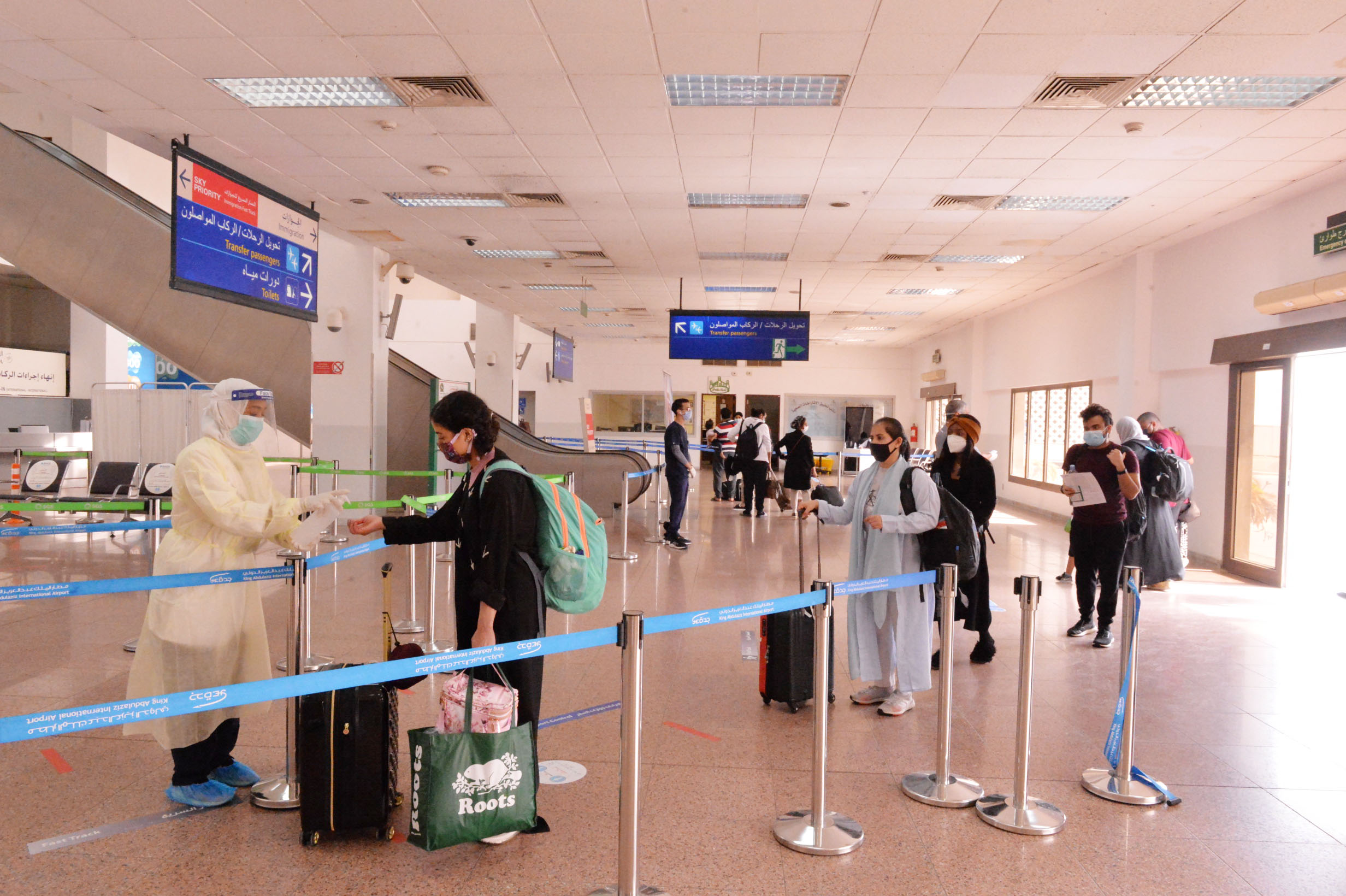