Upon the arrival of the Custodian of the Two Holy Mosques, he was received by His Royal Highness Prince Khalid Al-Faisal bin Abdulaziz, Advisor to the Custodian of the Two Holy Mosques, Governor of Makkah Province, he was also met by Prince Meshal bin Majed bin Abdulaziz, Governor of Jeddah, also on hand was the Minister of Transport, Chairman General Authority of Civil Aviation (GACA) Dr. Nabil Al Amoudi, and the President of the GACA, Mr. Abdulhadi Al Mansouri.

The national anthem was played thereafter.

The Custodian of the Two Holy Mosques then toured the Airport Terminal, which is considered one of the largest airports in the region with a total area of ​​810,000 square meters, with a capacity of 30 million passengers annually.

He saw a presentation of the most prominent aspects of the airport.

After the Custodian of the Two Holy Mosques King Salman bin Abdul Aziz Al Saud took his place, a recitation from the Holy Quran was read thereafter.

Then the Custodian of the Two Holy Mosques, then watched a video presentation on the civil aviation sector in the Kingdom of Saudi Arabia.

He on to say, while addressing the the Custodian of the Two Holy Mosques, Your Majesty continue to march toward the achievements and all ambitions, standing side by side by Your Honorable Prince Mohammed bin Salman, who stressed that the vitality of the Saudis as high mount. Tuwaiq can’t be broken unless the mountain is leveled to the ground." It is a matter of pride that many of your sons, the young Saudi cadres who have contributed greatly to the completion of all phases of this project, from planning and design to construction, supervision and operation, benefiting from the generous care given to them by our wise government to the Saudi citizen, where is the mean to achieve the desired development".

His Excellency stressed that the objectives of this vital achievement will be extended to contribute to the erection of a logistical platform in the Kingdom linking the three main continents of the world, as the new airport will be able to work as a hub linking East and West, and serves as a collection point for the movement of passengers and goods, to assume an influential position among international airports in the world, especially the hub airports and will be able to acquire a fair share of the air transport market in the region.

His Excellency went on to say, "Today we are proud of this giant achievement, not only for its huge size and for its architectural designs that match the best of international airports around the world, but for its unique role in serving the pilgrims, where it serves as the gateway of the Two Holy Mosques, noting that about 70% of the total number of pilgrims and Umrah performs travel through this airport. Today, we are able to achieve your aspirations to serve the pilgrims and attract 30 million pilgrims annually, which is one of the objectives of the Saudi Vision 2030. "He pointed out that according to studies that confirmed the increase in the number of passengers during the coming years and will continue to rise in the coming years. GACA have drawn up plans to enable the airport to accommodate this number, under these plans which will be implemented in the airport second development phase will be raised to absorb a capacity of 55 million passengers, up to 100 million passengers in the third stage, God willing”.

Dr. Nabil Al Amoudi explained that all this comes amid a comprehensive facilities, modern equipment and advanced technology in a terminal complex, that sits on an area of (810) thousand square meters, under which all air carriers can operate, and includes (220) counter for all airlines, (80) self-service and (128) passport control counters, The gates are connected to (94) mobile bridges serving (70) aircraft simultaneously and parking structure that can accommodate more than (21600) cars. This in addition that the design features are inspired by the Kingdom's environment in general, and Jeddah area environment in particular.

Then, the Custodian of the Two Holy Mosques and the esteemed audience, then watched a video presentation entitled (The New World Facade).

The Custodian of the Two Holy Mosques was presented with a memorial gift on this occasion, which was presented by the Minister of Transport and Chairman of GACA.

A group photo was then taken for the occasion. 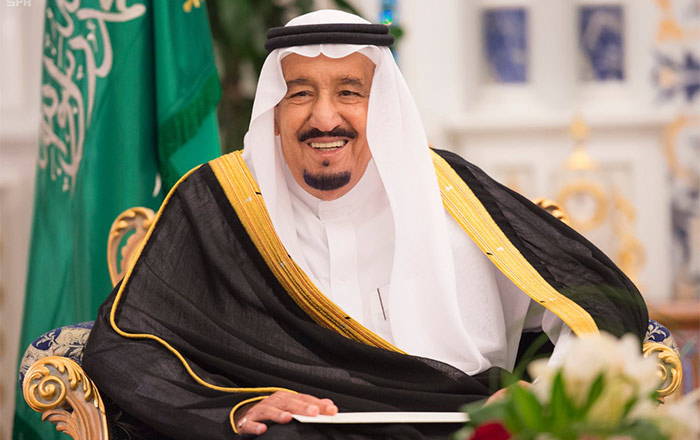