"Air corridors" ... The safe way for the plane to reach its intended destination

Air routes are known as those air corridors designated for the movement of aircrafts in airspace and linking airports between them. Air routes also provide the ability to cross the airspace of the Kingdom of Saudi Arabia according to the instructions published in the Saudi Aviation Manual.

Aircrafts flies to its final destination by sending a flight plan to the air traffic services provider that contains the entire flight path so that the air traffic management is planned and organized before and during the flight.

The International Civil Aviation Organization (ICAO) has developed procedures and systems for the design of air corridors with the aim of providing airspace that ensures the safety and security of aircraft in the airspace, while pilots rely on air traffic controllers to achieve separation between aircraft over the length of the flight.

Air traffic controllers work to organize and manage air traffic in air corridors and airspace, and this is done by studying and evaluating appropriate air routes to ensure the availability of the required navigation services. This in addition to information related to weather conditions or those that require rapid response of aircraft to a request for assistance and coordination of search and rescue, which is one of the most important basics of the work of air traffic controllers, which obligate them to provide all services if necessary.

Determining the air lane, or the air path that the aircraft will take is subject to many considerations and criteria such as the safety of flying over certain areas during the flight in addition to the time taken to fly, the economic cost of each route and the weather condition.

In rare cases, the pilot may not be able to adhere to the specified path for reasons related to the safety of the flight, such as: the weather in the middle of the route, or the activation of some restricted areas, in which case the pilot asks the air traffic controller to change course, or fly parallel to the air corridor to bypass any conditions affecting the safety of  the trip.

It is worth noting, that the General Authority of Civil Aviation (GACA) seeks to develop the air transport industry in accordance with the latest systems in line with developments in the aviation industry at the national and international levels. GACA continue to maintain the highest safety standards in the Kingdom by updating laws and regulations in line with developments in the aviation sector globally.  This in addition to conducting regular examinations for the licensing of air traffic controllers to ensure the highest levels of performance. GACA also conducts audit programs on air navigation service providers in accordance with the executive regulations of the General Authority of Civil Aviation and best practices to ensure the provision of services that contribute to achieving the highest levels of air traffic safety in airspace. 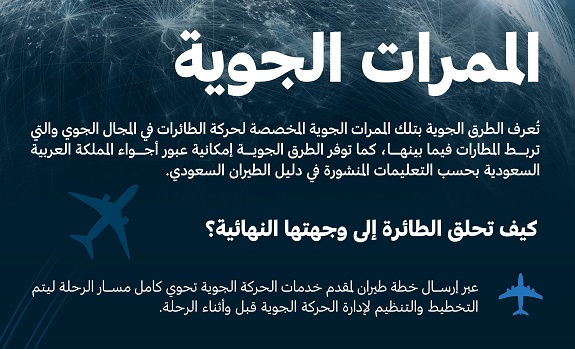