The General Authority of Civil Aviation (GACA) announced the highest number of passengers and flights that have passed through the Kingdom airports in 2018, compared to the previous years.  The numbers were recorded for the first time in the history of aviation in the Kingdom.

Furthermore, GACA, pointed out to the its top five destinations, where the UAE came in first, followed by Egypt, which came in second.  Pakistan and India shared the third and fourth consecutively, followed by Turkey in the fifth place as the top five international destinations.

It is worth noting, that GACA receives great and continuous support from the Custodian of the Two Holy Mosques, King Salman bin Abdulaziz, and HRH Price Mohammed bin Salman, Crown Prince, Deputy Prime Minister and Minister of Defense, furthermore, GACA is executing several initiatives and programs which contributed to the development of the air transport system in the Kingdom of Saudi Arabia.  All in an effort to achieve the leadership’s vision in developing the civil aviation infrastructure in line with the Kingdom’s Vision 2030 and raise the sector contribution toward the national economy. 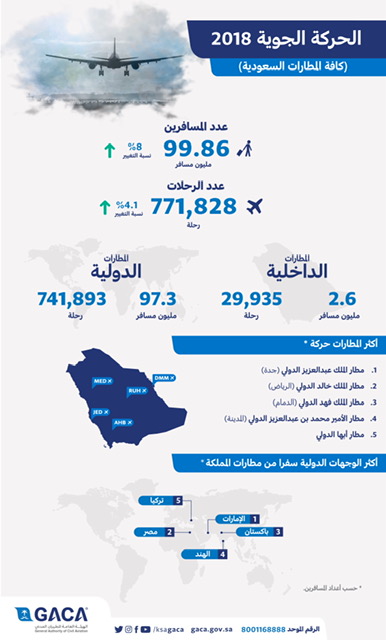