For the second year in a row and despite the conditions of the Corona pandemic, the Kingdom's international airports continue to advance among the list of the 100 best airports in the world. This came in the announcement of the results of the evaluation of the Skytrax international organization concerned with evaluating airlines and airports, in which more than 500 airports around the world participated.

These results come as a testament to the commitment of employees at the Kingdom’s international airports to provide the best passenger experience and to confirm the level of leadership and excellence and to move forward in the continuous development process to achieve the objectives of the civil aviation sector strategy emanating from the national strategy for transport and logistics services and to achieve advanced global positions. This in addition to enhancing the efforts of the General Authority of Civil Aviation (GACA) to raise the quality of services provided to passengers and develop the travel experience at the Kingdom's airports. 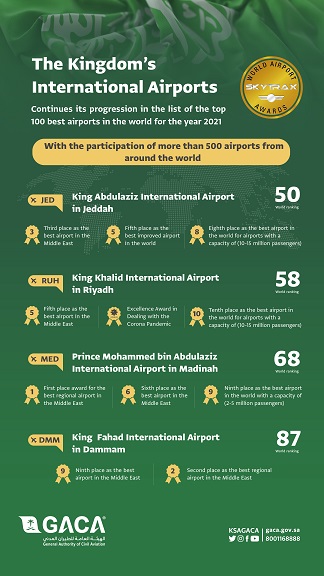